$20 Per Gallon by Christopher Steiner 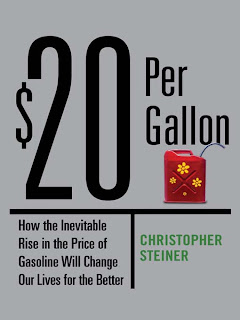 Christopher Steiner’s new book, $20 Per Gallon, released last month, tells the story of America’s future in a world of rising gas prices. Steiner combines the insight of experts and industry leaders in energy, transportation, and agriculture to paint a vision that inspires awe, anticipation, and sometimes apprehension. By the time gas prices reach—you guessed it—$20 per gallon, Steiner predicts that Americans will no longer enjoy a plethora of cheap, made-in-China products; vacation destinations such as Las Vegas, Jackson Hole, and Disney World will cease to exist; and sprawling suburban homes will grow vacant. All of this because oil prices, continuously heightened by decreasing supply and increasing demand, will kill most major airlines, exponentially raise the cost of shipping, and overthrow the automobile as America’s cheapest, most convenient mode of transportation.
Overall, however, Steiner’s envisioned future is a bright one. Even under the constraint of high oil prices, America will adapt, maintaining its position as an economic leader. To do so, the U.S. will need to maintain accessibility within and between cities, allowing people and goods to reach the jobs and industries that drive America’s production. Luckily, as Steiner points out, the world already has plenty of examples of fuel-efficient transport from which to learn. New York City’s subway system, unparalleled in capacity by any other mass transit system in the U.S., will become the envy of cities around the country. As suburbanites abandon their half-acre lots and take up residences closer to their jobs, these cities will grow not only in population, but also in density. This density, which now fuels the overwhelming use of New York’s subway, will drive cities to invest in new mass transit systems. Similarly, Americans will need a more fuel-efficient method than airlines to travel from city to city, and Steiner suggests that many regions will develop high-speed rail lines modeled after those in Europe that transport people in France, Germany, and Spain at 200 mph.
Steiner’s book is a thought-provoking and entertaining read, highlighting several illustrative examples of the effects of rising oil prices in each chapter, culminating in the end to provide a thoughtful and intriguing view of the future. These examples provide insight from a variety of experts and perspectives, calling attention to an important issue in a manner that is engaging and accessible to the public. Steiner makes many apt predictions. Many airlines, especially those that struggled at $4 per gallon, will probably fail before new technology will save them. Traveling overseas will be much more difficult for the average American. Certain everyday items will become luxuries in the future. Overall, $20 Per Gallon is a very worthwhile read.
However, $20 Per Gallon fails to fully consider the effects of new developments in technology, especially improvements to electric cars. First, one assumption on which the premise of the book is based, that demand for oil will keep increasing despite rising prices, lacks thorough justification. Second, the prediction that America will choose rail and mass transit as the sole modes of transportation to reduce oil use lacks evidence. In the chapter entitled “The Car Diminished but Reborn,” Steiner points out several upcoming innovations including GM’s plug-in hybrid, the Chevy Volt, to be released in 2010. According to a New York Times article published on August 12th, the Volt is estimated to get 230 mpg in city driving, and its competitor, Nissan’s Leaf, would get 367 mpg in the city. Steiner also refers to Better Place, which is developing the electric equivalent of gas stations, allowing drivers to take long trips without charging their batteries overnight.
Given these innovations, as well as the many others likely to develop soon given the huge economic incentive to develop alternative energy and transportation technologies, Steiner’s conclusions are not certain. At 300 mpg, over 10 times higher than the current average mpg, Americans could still afford to drive at $20. The Volt, currently priced at $40,000 may not be accessible to the average American. But as the technology is further refined and economies of scale develop, that price tag will surely drop. And with such little fuel required to operate these cars, demand for gas might not increase as quickly as Steiner expects. Furthermore, companies like Better Place will allow people to drive as far as they choose, challenging an increased necessity for alternative modes of transportation such as rail and transit. America has spent decades developing an infrastructure based on the automobile, and while many dense areas such as New York City depend on mass transit systems, the need to abandon roads for rail in all areas of the country is unlikely.
Although Steiner does not discuss policy implications in his book, the predictions in $20 Per Gallon speak to action today. While previous policies to reduce America’s dependence on oil have largely been aimed at environmental and security benefits, fuel-efficient transportation systems also frequently have economic benefits. As Steiner points out, fuel efficiency will be a necessity for the U.S. to maintain its economic standards at $20 per gallon; however, such developments would spur huge economic gains in present day. Mobility between and within cities is important regardless of gas prices; it is a major driver of economic growth in and of itself. Metropolitan areas with populations greater than one million account for 54 percent of the U.S. population and 65 percent of the nation’s GDP. These cities are the cornerstone of America’s economy, and it is essential that they be easily navigable and well connected. However, high speed rail and mass transit are not the only modes of transportation that could achieve these goals. Policy should reward transportation investments that improve mobility, connectivity, and economic competitiveness. Programs that score highest in these areas should be federally funded, regardless of mode, driving real economic growth in the present.