Our Commentary on the Department of Transportation's Reform Proposal 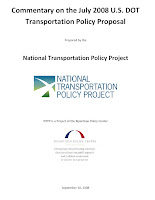 In case you missed it, last week we released a commentary on the DOT's reform proposal. If you are interested in reading it, the document can be found here.
No comments:

The Financial Crisis on ALL Streets 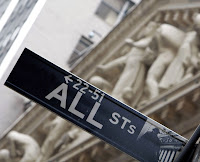 One of the biggest worries about the current financial crisis on Wall Street is that it will spill over and affect “Main Street”. Yet Main Street is not the only street we should be worrying about, ALL streets could be affected. In other words, this economic emergency will surely impact the next transportation bill in a variety of ways.

To begin with, the large increase in transportation spending that many in Congress are calling for may not be possible given the massive amounts of debt the government will soon take on if it finances a bailout. The current transportation revenue mechanism, the Highway Trust Fund, is already faltering, unable to raise enough money to keep up with authorized spending. Forget about increased spending, even spending at our present level in the future is impossible unless either new transportation fees are levied or money from the general fund is appropriated. Given that the general fund is already maxed out, something has got to give: either more national debt or higher transportation charges for users.

It is highly unlikely, but conceivable, that spending on transportation would decrease, but that would be a huge mistake. An efficient transportation system is fundamental to economic growth, and while underinvestment in infrastructure may not cause pain today, it surely will down the road. But, as we have mentioned in various other places, there are at least two things that can be done to improve transportation without increasing spending: more effectively invest what we already have, and better price the existing system to increase its efficiency.

We cannot expect to improve the transportation system simply by throwing more money at it; that was tried with the last transportation bill and it has failed. What is needed is smarter investment, investment that is prioritized on national goals and on performance outcomes. As obvious as that sounds, it would be a sea-change in how things are done today.

In addition to performance based investment, better pricing of the current system would improve efficiency overnight. For example, a free, bumper-to-bumper lane on the highway carries many fewer cars per hour than a priced lane that has free flowing cars.

These are simple ideas, but recent transportation bills have not addressed them directly. Perhaps the financial crisis will necessitate a back to basics approach in the next go-around, which would help the transportation system without costing a dime.

Yesterday the House approved legislation transferring $8.017 billion from the general treasury into the near-bankrupt Highway Trust Fund.  President Bush is expected to sign it quickly and thus temporarily fix what could have been a crisis in highway funding nationwide.

Although Congress has justified the transfer based on the fact that interest was owed to the highway trust fund from years past, the reality is that we probably need to accept two things about this turn of events:  1) This solution is terrible and 2) This solution was better than the alternative.

The solution is terrible because it fundamentally destroys whatever was left of the user pay principle in highway funding.  Sure, the fuel tax is a poor substitute for a user fee as it fails to take into account key externalities.  But general fund revenue is way worse, as it leaves almost no connection between who pays and who benefits, thus worsening the continued perception among the driving public that roads are “free.”  Moreover, given the lack of any actual general fund surplus, this “transfer” is really just increasing the national debt at a precarious time.

The solution is better than the alternative because without it, states would have begun to receive less than anticipated highway funding, causing project delays across the country.  These delays would have a substantial economic consequence that is probably much worse than an increased debt or people paying for roads through their income taxes.

In the end this lesser of two evils stems from an inability amongst leadership of both Congress and the Executive to convince Americans that they should pay explicitly for their transportation infrastructure.  There is a reason why no increase in trust fund revenue has been proposed despite this long-anticipated shortfall – a complete lack of vision for transportation policy.  Rather than confront this problem, federal leadership has chosen to pass the buck for the past six years.  This buck-passing will keep going into the next administration for sure, but at some point it will become unsustainable.  We can only hope that perhaps then a new vision will be welcomed and spearheaded by the leaders we need so desperately to do so.

What Are The Candidates Saying About Transportation?

Not much, is the correct answer. (You can bet that they're not whispering about transportation in that photo). At the Democratic convention last week, and at the Republican convention this week, the topic of transportation policy and infrastructure has been absent. Now, maybe some have been talking about it, perhaps minor speakers at non prime-time hours, but of the major voices? Very few. There has been a great amount of focus on clean, renewable energy, and that ties in with transportation in a serious way – but it is separate from the policy and infrastructure issue of roads, rails, and transit.

For example, at the Democratic convention, both Bill and Hillary Clinton mentioned energy, but not transportation. Same story with Joe Biden and John Kerry. Michelle Obama spoke of neither. Transportation made one brief appearance in Barack Obama’s speech when he called for government to “invest in new schools and new roads.”

From major Republicans in Minneapolis there has also been no talk of transportation. President Bush, Rudy Giuliani and Sarah Palin all mentioned energy but not transportation, and Fred Thompson and Joe Lieberman mentioned neither. Perhaps John McCain will throw in a one-line reference like Obama.

Two of the only events we know about that focused on transportation were roundtable discussions held by the Rockefeller foundation at each convention. In fact, National Transportation Policy Project Members participated in Denver and Minneapolis, Jane Garvey and Senator Slade Gorton respectively. Other big names attended, like Pennsylvania Governor Ed Rendell, but so far as we know the forums were not televised.

In many ways this is shocking. For most Americans, transportation - alongside public schools and taxes -is their most frequent interaction with government. Driving their car, taking a bus, these activities are on infrastructure paid for by government. And everyone knows how poor that infrastructure is these days. Congested commutes, potholed roads, infrequent trains, these are problems that when fixed earn deep gratitude from the public. This is not to mention high gas prices, the Minnesota bridge collapse, and recently renewed discussion about the Bridge to Nowhere earmark. Why aren’t politicians talking transportation?

Perhaps most people don’t consider the situation as troubling as I do. That goes against my personal experience, and the experience of almost everyone I’ve talked to regarding the subject, but it’s possible. The more likely cause might be that people have become accustomed to mediocre infrastructure, and just enough is being done to stifle complete road rage. Politicians can get by spreading out projects here and there rather than tackling the larger and tougher choices about how to fund, prioritize and invest in transportation. Given all the talk about leadership at the conventions you would think there is plenty to go around, but transportation is one area that is still crying out for it.