A map of our readership 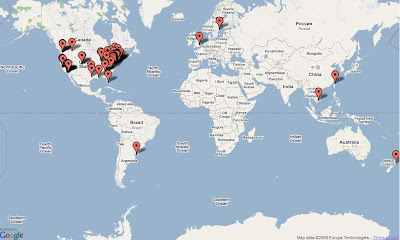 If you haven’t already seen it, we recommend checking out an important new source of real-world traffic congestion data provided by the company INRIX. Bryan Mistele, the president of INRIX, is a member of our National Transportation Policy Project, and his company is the leading provider of real-time, historical, and predictive traffic information. INRIX’s data collection is unique in that it combines Department of Transportation road sensor information with GPS and toll tag data from commercial vehicle fleets like taxis and trucks. In addition, the company can incorporate factors like weather, construction, school schedules, and sports events into its traffic predictions.

This type of hard data seems imminently more valuable than the modeling that has traditionally tried to define congestion, such as the work by the Texas Transportation Institute (TTI), and it is little surprise that TTI’s ranking of the most congested areas differs from INRIX’s. INRIX ranks the top five congested areas as Los Angeles, New York, Chicago, Washington DC, and Dallas. TTI ranks them (based on 2005 data) as Los Angeles, San Francisco, Washington DC, Atlanta, and Dallas. TTI bases its estimates primarily on survey data of travel habits and broad statistics such as traffic volumes and highway lane-miles. The flaws in this type of methodology have long been apparant, but no better alternatives existed. It will be interesting to see how INRIX's data is harnessed gonig forward to overturn other pieces of flawed conventional wisdom. Comments on this thought are encouraged.

In addition to better defining the congestion problem, INRIX’s data enables the pinpointing of specific trouble spots such as interchanges, construction zones, and merge lanes. The value of such cutting edge analysis is that it allows metro areas to identify and fix the flaws in their transportation systems. Experts and planners in the transportation community have long called for better data to help them understand and predict how transportation networks function, and that call is finally being answered by the sophisticated technologies of companies like INRIX. With more real data becoming available each day, let’s hope that real improvements in mobility soon follow.

A toll by any other name

A recent article in the Washington Post noted the phenomenon that some commuters drive significantly out of their way just so they can use the Dulles Access Road, which has very little traffic because it’s only intended for people on “airport business.” For those unfamiliar with the DC area, the free Access Road to the airport runs parallel to the Dulles Toll Road, which is priced at 75 cents in each direction but is still severely congested at rush hour. Put simply, people coming or going from the airport are able to use the Access Road for free and quick travel, and everyone else is supposed to pay for the Toll Road which still ends up having heavy traffic. As the Post observed, however, some people are rerouting their commutes through the airport just so that they have an excuse to use the Access Road, thus avoiding the traffic and cost of the Toll Road. Two conclusions can be drawn from this sneaky behavior: the Access Road is being underutilized, and the Toll Road is underpriced.

While some people might argue that the Toll Road is overpriced since people are trying to use the Access Road to avoid the toll, this is the wrong conclusion to draw. When people go out of their way to use the Access Road they are not only paying for extra gas, but they are often also paying for a coffee or newspaper from the airport gas station to prove that they are on “airport business.” They are primarily using the Access Road not to avoid the toll, but to avoid the heavy traffic congestion on the Toll Road. If the cost to use the Toll Road was increased in accordance with time of day to fight congestion, then people would have to pay more but would benefit from free flowing driving speeds in return (because some people would choose to change their route or time of commute, thus taking cars off the road).

The lower traffic on the Access Road indicates that it can serve a greater number of people than just those on “airport business.” To take advantage of this, anyone who wanted to use the road but was not on airport business could be charged a toll, and that toll could vary to make sure that the road stayed uncongested for all users, airport travelers and commuters alike.

The current phenomenon is a strange example of congestion pricing by accident. People who sneak onto the Access Road are actually paying a toll to avoid congestion, in the form of extra gas or a cup of coffee. Rather than trying to stop this sort of behavior, the Metropolitan Washington Airports Authority should seek to encourage it by charging a legitimate toll. Many people are clearly willing to pay to avoid congestion, and both the Toll Road and the Access Road should give them that option more directly and explicitly.

The Surprising Flexibility of American Motorists

In recent days more evidence has emerged of the serious changes Americans are making due to $4 a gallon gas. According to a recent American Public Transportation Association (APTA) ridership report, 85 million more trips on public transportation were taken in the first three months of 2008 than in the same period of 2007, a 3.3% increase over last year’s record total. The largest increases were seen in the nation’s light rail systems, which experienced an average of 10.3% ridership growth over last year, though increases were seen on all major modes. At the same time, the number of auto vehicle-miles travelled (VMT) is beginning to decrease at levels unprecedented in recent history.

Major papers like the New York Times, the Washington Post, and the Associated Press are all writing more frequently about not just increased transit use but also about the purchasing decisions we discussed in our previous blog. Reading between the lines a bit, one detects a bit of shock that Americans are actually changing their transportation habits, because for years the conventional wisdom has been that in the short term our demand for gasoline is what economists like to call “inelastic.” In other words, it was thought that our transportation system was so car and gasoline dependent that people had little flexibility in the short term when gas prices rose.

While it’s true that Americans are feeling a serious sting from these prices, it’s also true that many have been surprised to discover that they have other options they had never really utilized. The conventional wisdom discounted the fact that America is no longer a rural nation: roughly 70% of Americans live in urbanized areas, and many of those areas have public transportation systems whether they are subways, ferries, street cars, or buses.

The fact that we have recently seen such significant shifts in consumer behavior should indicate to policymakers that the auto fuel market is more elastic than most have imagined. Increased transit usage and decreased VMT are only a reflection of the more permanent changes that will likely accompany higher fuel prices, including increased fleet fuel efficiency, urban redensification and more public transport-oriented development. Policymakers should be conscious that they can have a hand in changing (or preserving), the status-quo of transport behavior in this country through their treatment of the fuel tax and other fees. This newly discovered tool in the policy tool box is good news for the unusual alliance of interests that care about our high oil dependence, environmentalists and national security hawks alike.