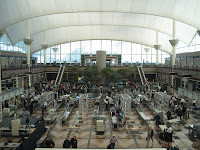 A recent article in The Atlantic about airport security argued that most of the measures put in place after September 11 to prevent more attacks are almost entirely for show, what the author dubs “security theater.” Not only is it still possible to sneak dangerous items through security, or components of dangerous items, it is easy to produce fake boarding documents and avoid the government's “no fly” list in the purchasing of tickets and screening of passengers. The most important safety improvements have been the strengthening of cockpit doors and the new awareness of passengers that they should take action if hijacked. The huge resources being poured into airport security and screening are thus doing little to actually further security and stop clever terrorists. Obviously this is troubling by itself, but it also holds lessons throughout the transportation industry in terms of theatrical solutions trumping real fixes.

As we have argued repeatedly on this blog, putting more resources into transportation infrastructure may be important, but it is not sufficient to ensure the system actually improves. There are important difference between band-aid solutions and fundamental restructurings. For example, fighting traffic congestion by adding more lanes attacks the symptom but not the problem. Congestion results from too many people wanting to use too little capacity at the same time. The optimal solution involves not only expanding capacity and alternative travel methods/routes, but pricing the existing capacity properly to ensure that people use it efficiently. This is really a fix it first philosophy – maximize what you currently have before building new stuff.

The ribbon cutting “theater” currently so popular in transportation ignores this strategy – and wastes valuable resources in the process. Similar to how current airport screening may be costing more than it’s worth, many transportation policies and programs give the impression of helping when they are really not long term solutions.

To fix transportation you must be able to assess the effectiveness of solutions. If we as a country keep spending more and more money on transportation but traffic congestion gets worse, emissions keep increasing, and the cost of business logistics rise, then clearly our policies are failing. The costs, priorities, and incentives built into current transportation policies are outdated. If the current way of doing things is allowed to persist for much longer, if theater trumps practicality, then transportation problems will only worsen. The time for transportation theater is over – there is not enough money to keep putting on a grandiose show.

Yesterday brought news that the US Department of Transportation is moving forward with a plan to auction off up to 10% of the takeoff and landing spots at New York’s three busiest airports: JFK, LaGuardia, and Newark. Essentially, the DOT intends to cap the number of flights at the airports to increase on-time operations (too many flights can lead to major backups when problems arise) and auction some of the slots (all of which are currently free) to ensure that they are used by the airlines that value them most. In response, there has been an immediate outcry from airlines, the Port Authority, and some politicians all claiming that the DOT is overstepping its authority and that the plan will raise fares at the airports. Other options like more runways and better air-traffic control technology exist to improve on-time operations, but proper pricing seems like an important and valuable part of any proposal. In fact, pricing may work better in the long term than these other options: you cannot increase capacity forever, and technology improvements will eventually yield ever-smaller gains.

To elaborate, it should be noted that while the New York airports are important because of the large market they serve, they are also deeply interconnected to a broader national air and ground transportation system. Improving the performance of these three airports is crucial because their backups cause roughly two-thirds of flight delays around the country. The DOT believes the auction plan will cut flight delays at LaGuardia by 40%, which will create positive impacts felt around the nation. (For a neat map of global plane traffic check this out.)

There are obvious complexities to properly pricing airports, especially involving equity issues like ensuring flights to small markets (a 747 flight to Los Angeles with hundreds of passengers on-board can pay more for a flight slot than a small plane headed for upstate New York), and a large cause of air-congestion is weather related, not due to capacity constraints. But at airports facing capacity-based congestion problems, the pricing of slots or of certain routes will likely yield benefits – especially if pursued in conjunction with an integrated ground transportation policy. For example, one way New York could ease congestion is by reducing the numerous flights to Boston and Washington, DC, via a better and faster train system to connect the cities.

There are major political problems to implementing pricing at airports, and it is unclear if the DOT plan will be implemented in the end. But the fact is that flight congestion and delay is a major problem that imposes high costs on passengers. Solutions are needed. Technology improvements, capacity additions, effective pricing, and a more integrated air and land transportation system are all important parts of a comprehensive answer. Yet each of those pieces also has some merit standing alone. Given that a comprehensive solution seems unlikely any time soon, the question becomes whether a partial solution is better than nothing at all.